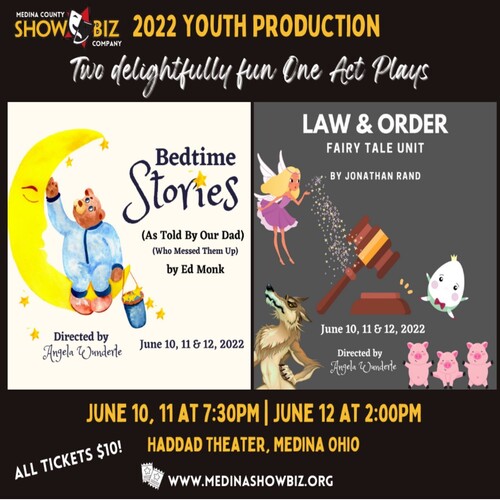 It's Dad's turn to tell his three rambunctious kids their bedtime stories, but when he gets fuzzy on the details, the classics get creative: a prince with a snoring problem spices up The Princess and The Pea, The Boy Who Cried Wolf cries dinosaur instead, and Rumpelstiltskin helps turn all that pesky gold into straw. You may think you know your fairy tales, but not the way Dad tells them.

Wally, Ashley, and Katie demand Dad tell them stories from his imagination, just like Mommy usually does. Dad, being tired and an accountant with no imagination, has trouble but comes through with three odd stories, one for each kid. In the end, the kids realize that, even though the stories were weird and Mommy’s are better, Dad still tried and that’s what counts.

Detectives H.D. and Cindy lead an investigation into the destruction of the Three Little Pigs’ homes. After stumbling through various fairy tale creatures and characters, they arrest B.B. Wolf, who has a rap sheet longer than The English Patient. Skilled District Attorneys Stiltskin and Merm try Wolf in court, but everything might not be what it seems…