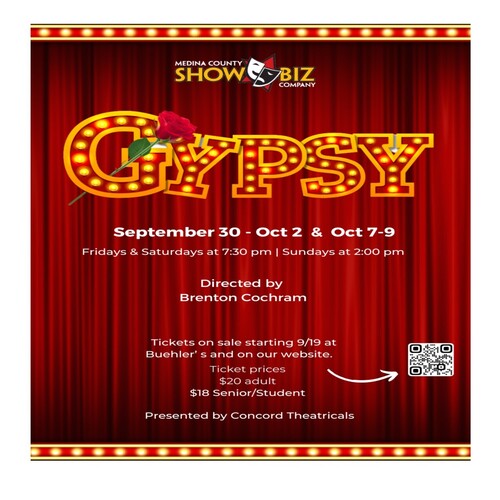 Gypsy is the ultimate tale of an ambitious stage mother fighting for her daughters' success - while secretly yearning for her own. Set all across America in the 1920s and 30s, when vaudeville was dying and burlesque was born. It is now being produced right here in Medina, OH by Medina County Show Biz Company. Come see the show that is regarded by many theatre professionals as the greatest of all American musicals. Gypsy tells the story of the dreams and efforts of one hungry, powerhouse of a woman, Mama Rose, to get her two daughters into show business. Gypsy is loosely based on the 1957 memoir of famous Burlesque artist Gypsy Rose Lee, The memoir and the musical focus on the story of Gypsy Rose Lee’s mother, Rose, and earned Rose a place in the theatrical and literary canon as the quintessential, archetypal “Stage Mother.” The musical features songs that have become standards of the musical theatre canon, including “Some People,” “Let Me Entertain You,” “Rose’s Turn,” and the show-stopping, “Everything’s Coming Up Roses”. Gypsy is famous for helping launch lyricist Stephen Sondheim’s career.